I needed to spend some time alone: to get away and be on the move, answerable to no one. So I headed north, just for the weekend.

I caught two buses up to Taynuilt, a small village just to the south of Loch Etive, arriving at around 1500 on the Friday. After buying some supplies (namely potato scones and soup) I made for the south-eastern shore of the loch. Before long I was in the fields, amongst sheep, ancient oak trees and running streams. All around, and not too far either, loomed the hulking shapes of the surrounding hills. The highest reaches had been crowned snow, and their clustering felt both protective and challenging, even when I entered the woods and could no longer see them. Their ancient, timeless presence underlies everything. 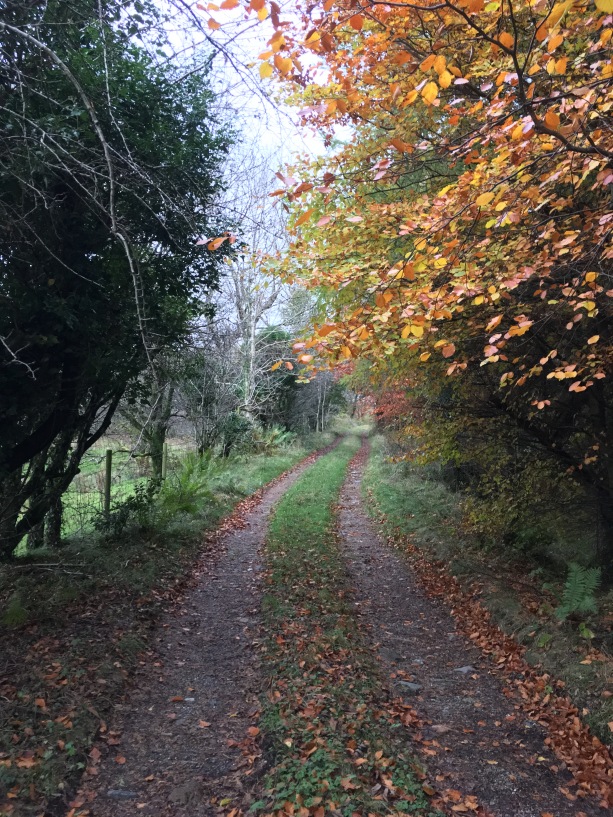 These woods were no 50-year Forestry Commission crop, which are empty, silent and eerily regular, interpolated by huge fields of carnage, where debris and severed stumps are the only things to be seen. This was native, mixed broadleaf deciduous woodland, fading from Autumn into Winter. This kind of surroundings does something very good for the soul. I’m not sure I can describe what it is or how they do it, but I for one always experience a strong sense of belonging, community and nostalgia, perhaps for times that never happened. Give me oak, silver birch, hazel, alder, beech, sycamore and rowan. In the words of Sam Gamgee when he comes to Lothlórien: “I feel as if I was inside a song”. This song, however, has no music or words, and yet I was silenced by its beauty. 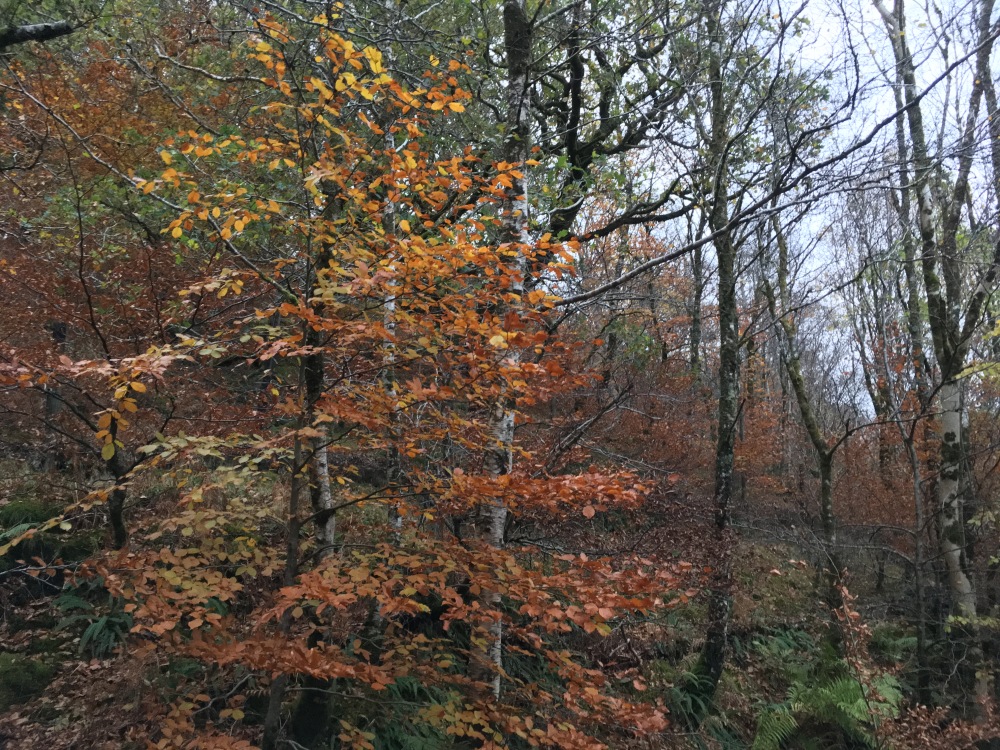 I went further into the forest by means of a track road and eventually came in view of Loch Etive. The mixed woodland continued to line the road on either side, and I could see over the water to the opposite shore. The snowy mountain tops were again visible, and I had an uninterrupted view of the loch up and down its length. By this time the light was starting to fade, but since I was not concerned about making camp in the dark, I pressed on. In any case, I wanted to be as close as I could get to the foot of the mountains I intended to climb the next day.

Another hour or so went by. I passed a house, completely isolated on the banks of the loch, on the south side of the large River Noe. A warm orange glow came from within, and I got a full, vicarious taste of the cosiness and security that felt associated with this dwelling. One road in, one road out: no neighbours, no traffic, nothing. Just the wind in the trees and the flowing of the river. Further up the road, a bridge crossed above the Noe, which was bubbling happily down into Loch Etive, and on the northern side a small but steep hill, clad by more deciduous, appeared out of the dark. I was now very keen to have a resting place for the night, and since the hill looked promising, I gladly clambered up to its brow, where I found a dell. The perfect camping spot.

I set up my tent underneath the trunk of a large fallen tree, which provided good shelter from the rain and some protection from the wind and the debris it carries with it. Gusts of up to 60mph were to harass me all night, but all I knew at first was that I should be quick about pitching the tent and making a fire. Doing things in adverse conditions is a very good test of your ability, or a hard, quickly-learned lesson. This time it was a healthy combination of the two. I got my tent up very efficiently, but I was impatient with the lighting of the fire, which consequently took much longer than it needed to. If I had collected more wood, processed it thoroughly and protected the fire from the wind, my life would have been much easier. Nonetheless, after a lot of perseverance and swearing, I eventually got a fire going: the mad cackle of glee I let out indicating the satisfaction of my achievement.

After getting my dinner and breakfast cooked, I rolled into bed – and not a moment too soon. The rain suddenly started coming down hard and the wind (which had been gusting violently all evening) picked up even more, blasting around the tent. Outside there was chaos, but inside it was warm, dry and still. I felt like I was in a hidden pocket keeping me safe from the storm. It was weird being in this little pod with such hugeness around me. “I’m so small here,” I said to myself, “it’s wonderful”. It was like being sat inside on a rainy day, times a million. Unfortunately, the brand new roll mat I’d bought a couple of weeks previously had come pre-punctured, and what seemed to be the clouds of wind barrelled through my campsite all night. I therefore didn’t sleep particularly well. I set off much later than I would have lilked the next day.

Being unable to get uphill from the point I had crossed the River Noe, my plan was to follow it along its northern bank, heading upstream and eastwards away from its mouth at Loch Etive. I would be looking out for a suitable crossing, at which point I would climb up onto the Ben Cruachan Ridge and follow it until it dropped back down to the north of Lochawe.

As soon as I saw the river, however, I knew it would be a while before a crossing would be possible. The previous evening, the Noe had been bubbling happily. After the night-long downpour, it was raging. Banks were burst, trees semi-submerged, and the whole river was rapid white water. Furiously it tore its way down the glen, flinging itself over and around rocks and hurling plumes of steam into the sky as it dived headlong into numerous waterfalls. The rain continued to fall, and countless tributaries, both small and large, perniciously fed the fury that barred my way. Slightly fearful, and certainly filled with awe and respect, I stuck to the northern bank for several hours.

The river’s anger was unrelenting, and was matched both by the wind and the rain. Lashes of water poured from the sky, and apparently from all sides too. Very quickly I was drenched to the bone. In a way this wasn’t too bad: my only choice was to embrace it, and since I kept moving, I remained comfortably warm. The gusts from the night before all seemed to have joined forces, as if resentful that they hadn’t been able to upturn my tent. I was knocked to the ground several times, and often had to sit with my back to the wind (which was hard since it kept changing direction), using my pack as a break.

The following thoughts struck me.

‘Western civilisation’ (whatever that actually is) seems to a large degree to inhabit a very limited ontology, which loiters around humdrum, physical reality. A historically problematic consequence of this is that it tends to generate misunderstanding of and disdain for perspectives that are more ‘creative’. Believing that Nature is alive – truly alive – is animist; allowing the subjective experience of the weather’s moods to be felt is anthropomorphising; and all religion or spirituality is superstition. And yet the remedy is simple, easily found and undeniably effective.

When you place yourself in the kind of environments I now found myself in, with not a sign of human activity, and the full power of the elements unleashed, it is to my mind impossible to deny the living nature of the wild. I felt I was surrounded by angry gods, gods of the river, the sky and the wind, the mountains and the very emptiness itself. Again I felt beautifully insignificant and tiny, in dumbfounded amazement at this battle of the timeless forces. 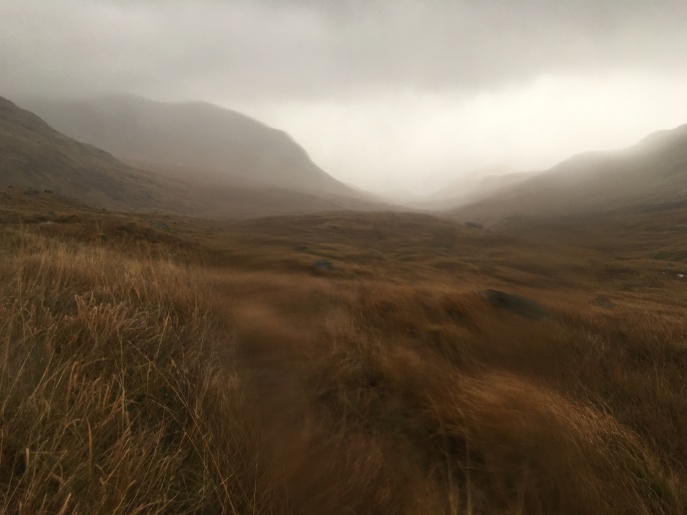 The practical upshot of these admittedly abstract and subjective ‘headscapes’ was that I decided I should not try and mount the ridge. Getting blown to my knees less than 300m above sea level in a protected glen made me think walking on exposed mountain tops a kilometre in the air perhaps wasn’t such a good idea. Instead I continued along the norther bank of the Noe up to its source and on over the saddle of the glen into the next. I came down the southeastern flank of Beinn a Chochuill until I hit the road again. The land was stretched out below me, looking much less wild and forgotten. Farmhouses, far away villages and even a castle were scattered underneath a sky that was slowly calming down.

For the rest of the day, the wind and rain held off, and it was not until I made camp that they started up again. My spot for the night was beautiful though. I was next to a stream, under a (1,000 year-old?) oak tree. Highland cows grazed timidly around me, and I lay in my tent from 1600 until 0700 the next day, listening to the wind, the rain, the stream, and the occasional lowing of the cattle.

The next morning I hitched a lift to a small roadside village called Tyndrum, where my boss and her fiancé kindly picked me up on their way back south from a mountain bike race in Kinlochleven. I did some more walking whilst I waited, but it was sunny and clear, so there is no story to tell.

It was a very good thing to get away, even for just one full day. It occurs to me that going on adventures isn’t necessarily about going somewhere grand for a huge period of time. It is a mindset, a perspective, and it is possible to make even a visit to the shops an opportunity for discovery and surprise. 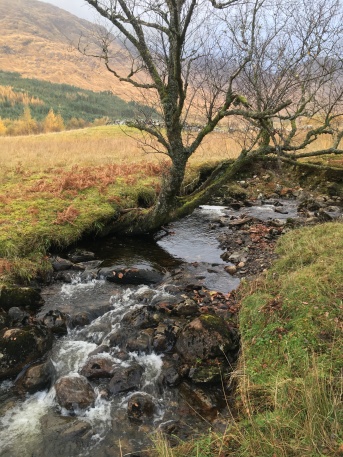 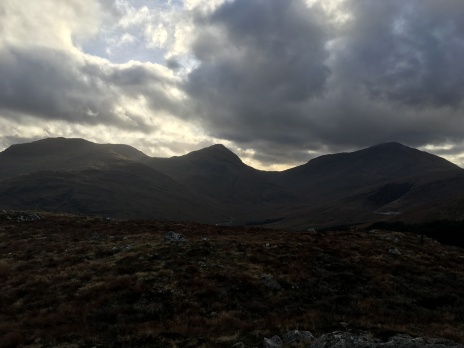 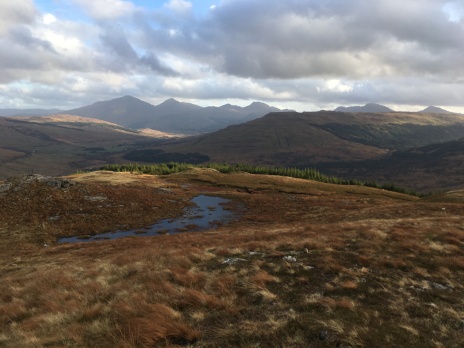