The next morning, after saying goodbye to Cameron and Rachel, I set off for Beinn Dubh (773m) and Ben Vane (916m). The weather, overcast but not too cold, was similar to yesterday’s, and as I made my way up Glen Kinglas to the northern slope of Beinn Dubh, I had a spring in my step and felt a new burst of enthusiasm and readiness for the day. Binnein an Fhìdhleir was a warmup, now I was getting stuck into it. This was evident in the speed it took me to summit Ben Vane. I set off from Abyssinia at 0920 and arrived to the peak at 1200. The wind had really got up at the top of Beinn Dubh, freezing me to the bone and causing huge blankets of cloud to move in all around me. Fortunately, the navigation to Ben Vane was easy enough (although it was good practise nonetheless) and walking at a good pace warmed me up again. Leaving my main pack at the bottom of the final ascent to Ben Vane’s summit, I took some essentials with me and made my way up.

Sadly, there was absolutely no view to reward my efforts, just a bout of nausea that demanded food and water, so I did not stay long at the top. Besides, I wanted to get down 400m to the glen separating Ben Vane and Beinn Ime, and then up another 500m to the peak of the latter. I walked back down to where I’d left my bag, and managed to get some wonderful views and powerful gusts of wind en route. Huddling in a V of rock, I munched happily on some cheese and tomato rolls and considered the time ahead of me. The feeling of being immersed in the landscape began to merge with that of being in the middle of trip, and I wished for more days at my disposal. It is great thing to have spent the previous night out in it, and to know that the coming night will also be spent there. It lets you get lost in that sense of remoteness, no matter how illusory. 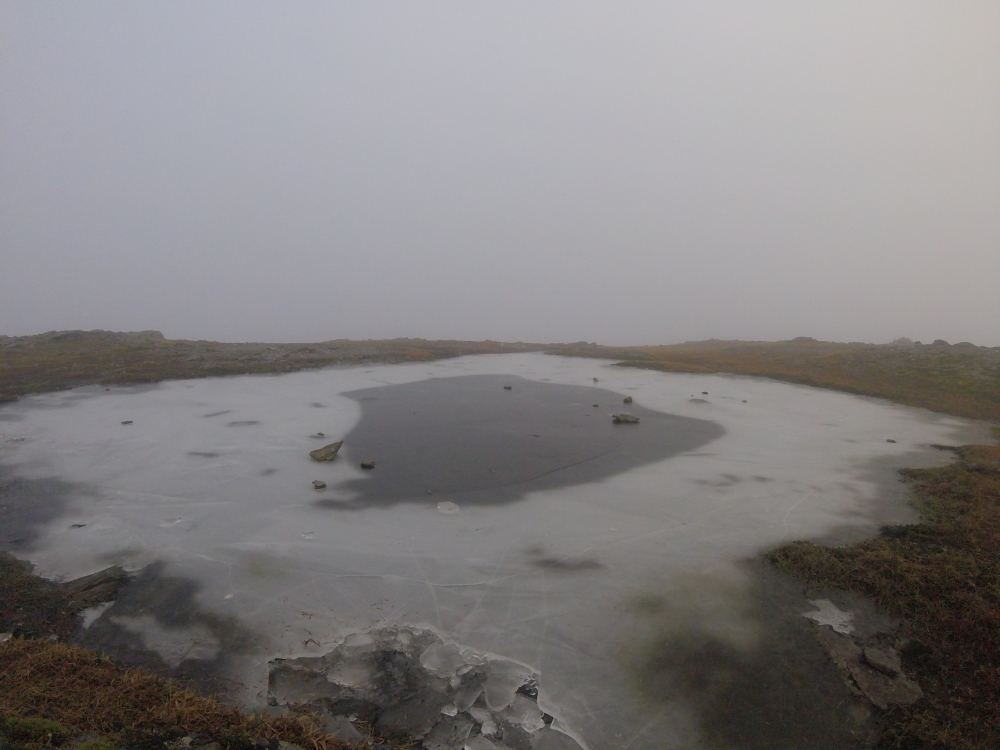 Once I reached the pass between Ben Vane and Beinn Ime, I again left my main bag in a cleft between two boulders, but this time I took my headtorch too. I then climbed up the steep slope to Glas Bealach, separating Beinn Chorranach and Beinn Ime. As I got steadily higher and higher, the ground got ever steeper, and I began counting steps to estimate the height I was gaining. I could see the road far below, with steep and high cliffs immediately to my right, but for the most part, more clouds obscured my view. Suddenly I must have hit the snow line, as the land changed from yellowy-brown with traces of bright orange, green and ochre, to white. Whilst there was no actual snow, ice covered the ground, in another array of fantastic formations. On the flat blades of grass (almost like reeds) were sail-like structures known as verglas, which are made when wind blows the moisture in a certain direction, which then freezes. Every blade had one, and as I got higher, they got thicker, longer and more numerous. They looked like miniature banners, flying the flag of winter. 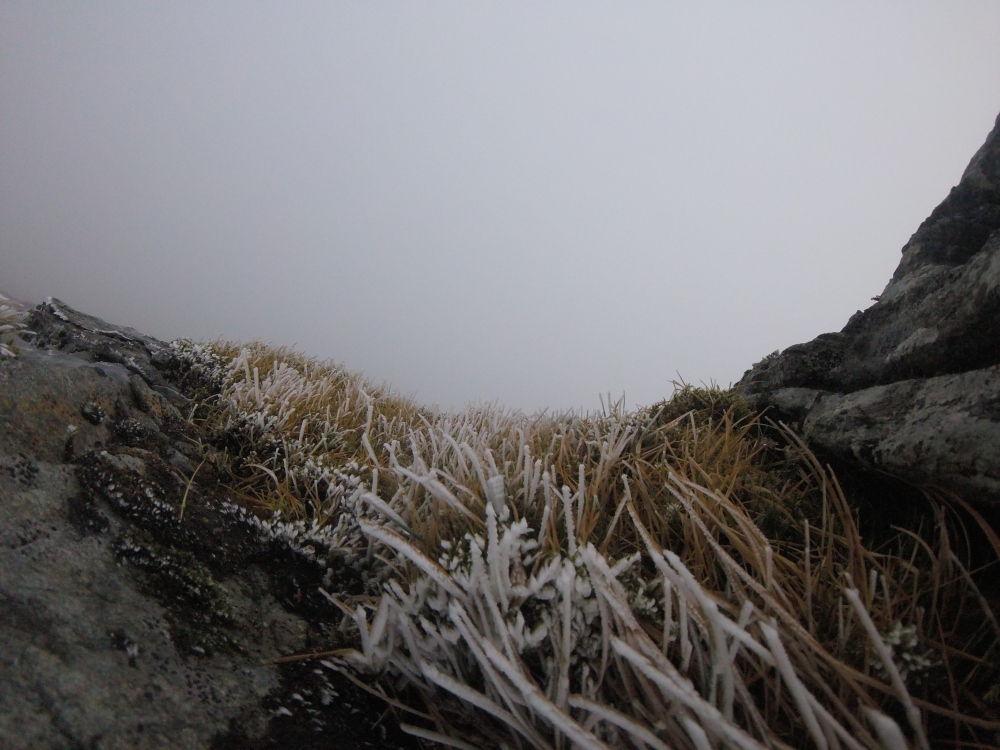 The peak of Beinn Ime is covered in rock, and due to the ice, it proved very treacherous. I made it nonetheless, but almost instantly had to start heading back down as I knew I had very little light left. I wanted to be below the clouds and at least back at my bag before it got dark, as I didn’t fancy looking around the boulders for any length of time. Tall crags loomed ahead of me on the south eastern side of Beinn Corranach as I returned to Glas Bealach, and I picked my way over the many deep burns, descending as fast as I could in the fading light. All about me was silence, and when I stopped squelching or crunching, I could hear absolutely nothing. High hills surrounded me on all sides. 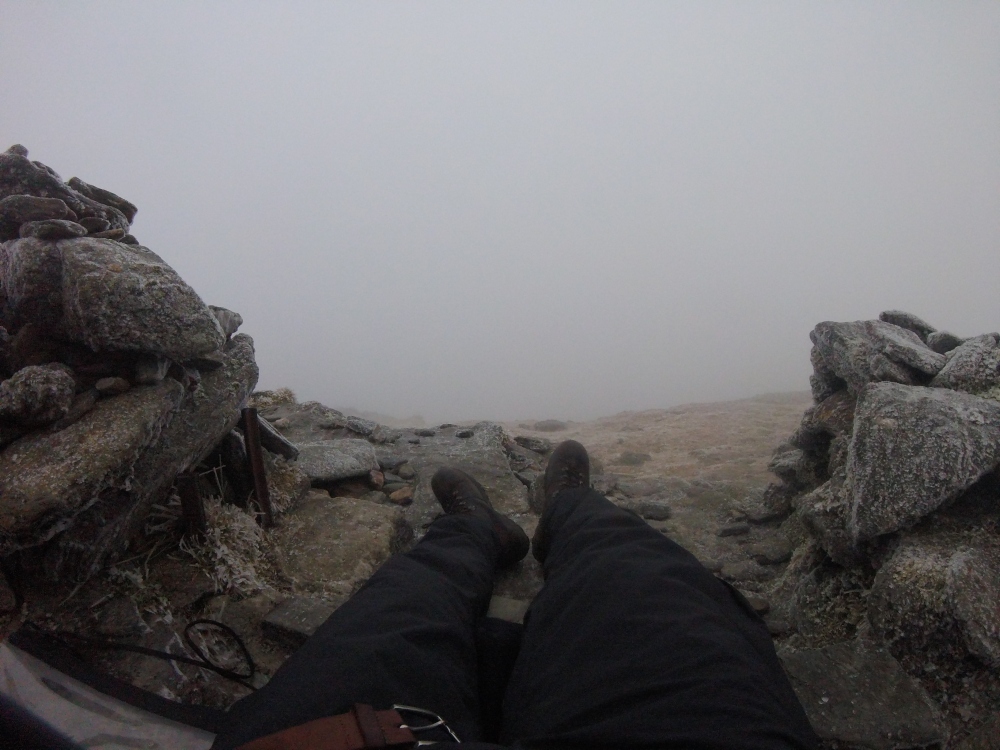 With a slight sense of relief, I got to my bag with no problems and after a small rest while I got myself sorted I started making my way south east to get down into the glen separating Beinn Ime and Ben Vane from Beinn Narnain, tomorrow’s goal. It was dark almost as soon as I set off, and before me was an impassable bog, so I stuck to the bottom of the hillside, just where the ground sloped upwards. Within an hour I had come down to the forest where I was to stop for the night, having followed an amazing river called Lag Uaine down its numerous waterfalls to a practically vertical drop onto the forest path. At this point I was really tired, and very keen to make camp as soon as possible. At first, this proved more difficult than anticipated, as the forested hillside coming away from the path was much steeper than it looked on the map. In addition, once I had penetrated the wood, it was a totally unhospitable plantation of spruce trees. They had been planted in set lines, and whilst the strip of ground from which they emerged was firm, the trenches in between were full of boggy slop, sodden moss and dead branches. Making for the Alt Coiregrogain (by the way I have absolutely no idea how to pronounce any of these Gaelic words), a small river at the bottom of the glen, I held out hope for a better patch of land, possibly on its banks where I could make camp. But after a while I became thoroughly disorientated by my confusing compass bearing, and in the dark with my torch my patience was wearing thin. Still, though, I kept going, knowing there would be no use in giving up, especially since I was still in a forested swap.

At last, my perseverance was rewarded, and I found a lovely little patch under a tree, with the river just below, on the edge of an open field where the land flattened out and firmed up. Laying my tarp on the still very wet ground, I set up my tent and got everything ready to make supper and pass the evening. I had got pretty excited when I first arrived, as it seemed there was an abundance of dead and dry standing wood around where my tent was. To my disappointment, however, it was all rotten and wet through, so I abandoned hope of having a fire, and just cooked my dinner over the stove. In fairness, this was absolutely fine. I was so tired that I couldn’t even be bothered to put the work in to make and maintain a fire, and all I really wanted was to eat my supper and get into bed. I did so, and very was soon was snugly wrapped up listening to the sound of the babbling stream below my feet – another soothing noise that is a great way to fall asleep.